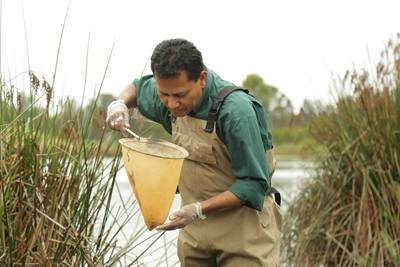 Sydney Olympic Park is home to the largest remaining mangrove forest on the Parramatta River and the team tasked with managing and conserving this estuarine jewel now boasts Australia’s first and only Professional Wetland Scientist, Dr Swapan Paul.

The 135-hectares of mangrove and saltmarsh wetlands at Sydney Olympic Park are a breeding ground for fish and other aquatic creatures, and a hotspot for waterbirds including the travelling Bar-tailed Godwit and the Sharp-tailed Sandpiper, which both migrate from the Northern Hemisphere.

Sydney Olympic Park Authority Wetland Manager Dr Swapan Paul knows the wetlands better than the back of his hand, having worked on conserving the diverse environment over the past 22 years. The International Society of Wetland Scientists recently confirmed Dr Paul as a Professional Wetland Scientist, the first in Australia to receive this title.

“Every inch of our wetlands serves a purpose,” Dr Paul said. “If trees are the lung of nature, then wetlands are the kidney. It is important to have wetlands around cities like we do here in Sydney, not only to provide habitat for endangered species, but to act as a natural filtration for better water quality and a channel for the city’s stormwater.”

“Wetlands also lock in the greatest percentage of organic carbon in nature, preventing the emission of harmful gases into the earth’s atmosphere,” said Dr Paul.

“Here at Sydney Olympic Park we have an experienced team of ecologists and asset managers, and our wetlands have become an international example of conserving nature with the increase of urban development,” said Dr Paul.

“Case studies of the Sydney Olympic Park urban wetlands management such as the protection of mangroves, installation of fishways, tidal flushing to the Park’s Waterbird Refuge and an annual program to reduce mosquito breeding habitats have been recognised across the globe,” said Dr Paul.

Sydney Olympic Park marked World Wetlands Day on February 2 and became a wetland appreciation and knowledge hub with a variety of educational and engaging events Sydneysiders were able to get up cloe and personal with teh wetlands and its inhabitants through a range of programs including Meet the Ranger walk and talk, Breakfast with the birds tour and a clean up our wetlands activity.