Sydney Olympic Park athletes have put a sporty twist on science experiments to excite and engage students and families for the Innovation Games during National Science Week. 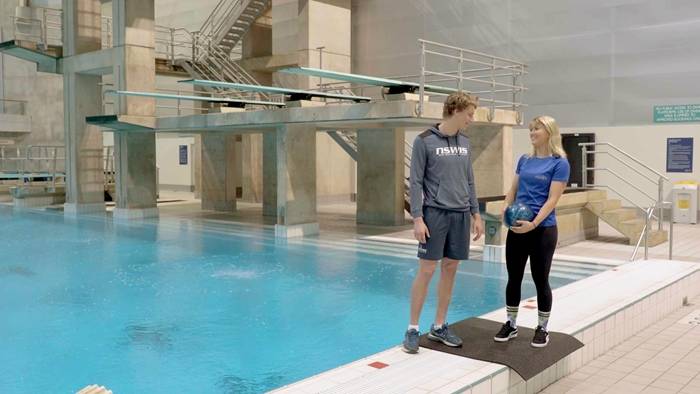 Representatives from Sydney Thunder, GWS Giants, Sydney Kings, NSWIS and the Australian Olympic Team have all taken part in a host of unique challenges students can replicate in the classroom or at home.

The traditional laboratory has been ditched in favour of some more thrilling sports backdrops as science experiments take a new form at the Sydney Olympic Park Aquatic Centre pool, with cricket bats in Cathy Freeman Park, on the court, bike and field.

“I spend a lot of my time in the water but it’s not every day you’re given the chance to throw a bowling ball into the pool!” said Brittany.

“Testing the different buoyancies was lots of fun and I certainly learned a few things along the way. I’d encourage kids at home to try similar experiment of their own.”

Sydney Thunder wicketkeeper Matthew Gilkes took soft hands to a whole new level as he and team mate Nathan McAndrew challenged themselves in a 75m egg toss without cracking the shell.

"It was a great test of skill and physics to see how far we could take the egg toss! I was lucky to have my teammate Nathan on the other end of the egg and we hope that people watching Innovation Games will have as much fun as we did and also maybe learn something along the way".

STEM+ communicator, author and TV presenter Lee Constable hosts the 2020 Innovation Games video series providing the scientific insight to help students understand the why and how behind what takes place in the fun challenges.

“Each experiment was built around scientific principles requiring an element of mental and physical skill, the way the athletes engaged in the challenges has made for great viewing,” Lee said.

“These events gave me plenty of opportunity to do some sci-commentary on topics like kinetic energy, aerodynamics, gravity and acceleration!”

"Sporty kids often intuitively use physics on the field or court or in the pool without realising it. Getting into the science of sport is a great way to make science relatable to kids who may not see themselves as sciencey!"

Now in its fourth year, the annual Sydney Olympic Park Innovation Games is a marquee event of National Science Week, traditionally staged as a free one-day sports science expo at Cathy Freeman Park. Event restrictions have meant this year the Games will have their own innovative twist.

From Monday 17 August to Friday 21 August one experiment will be released daily at innovationgames.com.au