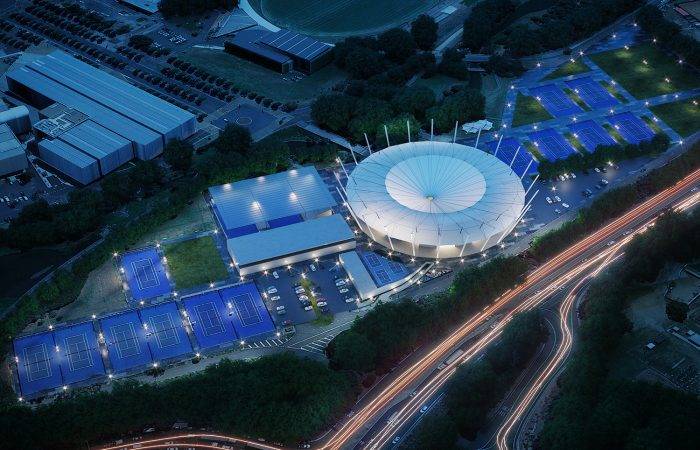 The Sydney Olympic Park Tennis Centre will be transformed into a world-class indoor venue under plans for a $50.5 million upgrade of the facility announced in early January by the NSW Government.

The upgrade will involve the construction of canopy roof structures over Ken Rosewall Arena and Show Court 1, creating an all-weather high-performance venue for tennis, Super Netball and other indoor-court sports.

The government will work with Tennis NSW and Tennis Australia to deliver the project in time for Sydney to host the inaugural ATP Tennis World Cup team’s competition in January 2020.

The project will be undertaken by Tennis NSW with funding and oversight from the state government, under an agreement that will ensure netball and other sports have access to the facility once the upgrade is complete.

In addition to the installation of canopy roof structures on Ken Rosewall Arena and Show Court 1, the project will also include upgrades to player and media facilities, lighting, seating, public amenities, and the acquisition of a sprung floor for netball.

Work on the Tennis Centre upgrade is expected to commence in early 2019 and the first stage will be complete in time for the ATP Cup in early 2020.

The ATP Cup is a new annual men’s team tennis competition which will lead into the Australian Open from January 2020 and feature teams comprised of the top players from 24 countries. Sydney has put in bids to host both the group stages and finals of the competition.